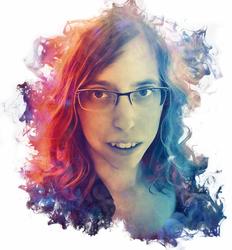 My first media to express myself were paintings and drawings, but recently I found out that I not just enjoy working with colors but also with words.