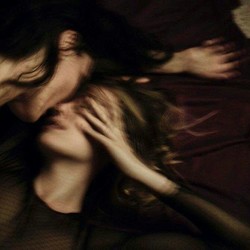 Never giving away any desire of fading away with the dusk, and coming back as the break of dawn.